Football in Serbia, Croatia to restart in May

ANKARA (AA) – Football contests in Serbia and Croatia will continue late May spurring fears of pandemic, football bodies of both countries announced on Wednesday.

"Calendar for the rest of the season was adopted, and 27th round is to be played on May 30, and the last, 30th round will be played on June 20," Serbian football authority said on its website.

The Serbian Football Association added that the four remaining rounds in the Super League would be held within the 2019-2020 season as there will be no playoffs and playout games.

It added that the Serbian Cup will be played as planned and the final will be held on June 24.

The virus forced Serbian President Aleksandar Vucic in March to declare a state of emergency, and nationwide sports events were suspended.

In addition to Serbia, another Balkan country, Croatia, will resume football on the same day.

The Croatian Football Federation (HNS) has decided the football competitions in the country will resume on May 30.

The HNS said on its website the football season will continue on May 30-31 with the Croatian Cup semifinals.

This year's local cup final was said to be played on Aug. 1 as the HNS previously planned.

Separately, it added that the Croatian Telecom First League will kick off on June 6 but all games would be played without spectators.

The Croatian football was disrupted in March by the virus.

Meanwhile, in Croatia, the number of cases rose to 2,119, and 85 people were killed by COVID-19, according to data from US-based Johns Hopkins University.

BELGRADE, Serbia (AA) – The Croatian EU presidency postponed all informal meetings scheduled in the country until 15 May due to the coronavirus pandemic.

"In order to limit the spread of the COVID-19 pandemic and to mitigate its effects, the Croatian Presidency of the Council of the European Union has decided to postpone until 15 May all Croatian Presidency related informal meetings scheduled to take place in Croatia," said the statement.

Also, a new date will be sought for the EU-Western Balkans summit in the capital Zagreb, which was initially scheduled for May 7.

The summit in Zagreb has been planned as one of the main events of the Croatian Presidency, aimed at gathering the leaders of the EU and region for the first time since Sofia Summit in May 2018.

A 4-month-old infant tested positive for coronavirus in Croatia, which has reported 1,343 cases so far. The death toll is 19, and 179 people have recovered from the disease.

Since the virus emerged last December in China's Wuhan city, it has spread to at least 184 countries and regions.

There are more than 1.44 million confirmed cases worldwide, with over 83,400 deaths, and above 308,200 recoveries, according to the U.S.-based Johns Hopkins University.

Foreign Minister Mevlut Cavusoglu and his Croatian counterpart Gordan Grlic-Radman also discussed the cooperation between Turkey and the European Union.

Grlic-Radman reportedly thanked Cavusoglu for his expression of solidarity with the government and people of Croatia over a 5.3 magnitude earthquake that struck the capital Zagreb on March 22.

BELGRADE, Serbia (AA) – Anadolu Agency's director-general expressed sympathy to Croatian people and the country's national news agency HINA in the wake of a recent earthquake that hit the capital Zagreb.

Senol Kazanci on Tuesday sent a letter in support of the HINA after the quake damaged the news agency's headquarters.

"With great sadness, I learn that the offices of the HINA in Zagreb were severely damaged in an earthquake. At this hour of grief and difficult times, Anadolu Agency stands by the Croatian people and colleagues in the fellow news agency HINA," said Kazanci.

"Please accept our deep sympathies for the injured people and we wish their early recovery," added Kazanci.

It damaged many homes and workplaces in the capital, as well as historical buildings.

Prime Minister Andrej Plenkovic said the earthquake was the strongest in 140 years, calling on people, who left their buildings, to stay calm and keep their distance from one another amid the global coronavirus pandemic. 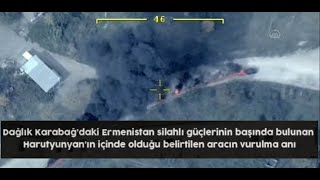